For those of you not familiar with the Huffington Post’s religion column I commend to you their online religion blog, it is diverse in authorship and viewpoint but so frequently right on (whether or not the author belongs to a group I normally agree with) that I have found it invaluable. There, Frank Kirkpatrick turns to the father of modern theology, Thomas Aquinas, to address the current crisis.

Thomas’ words speak with an appropriately counter cultural edge. If the proof of any theology is its check against the words of Christ, Thomas’ nails it. He makes the seats of the wealthy as uncomfortable and dangerous as did his Lord, Jesus.

Mark 10:17 As he was setting out on a journey, a man ran up and knelt before him, and asked him, ‘Good Teacher, what must I do to inherit eternal life?’ 18Jesus said to him, ‘Why do you call me good? No one is good but God alone. 19You know the commandments: “You shall not murder; You shall not commit adultery; You shall not steal; You shall not bear false witness; You shall not defraud; Honour your father and mother.” ’ 20He said to him, ‘Teacher, I have kept all these since my youth.’ 21Jesus, looking at him, loved him and said, ‘You lack one thing; go, sell what you own, and give the money to the poor, and you will have treasure in heaven; then come, follow me.’ 22When he heard this, he was shocked and went away grieving, for he had many possessions.

Jesus turns to his disciples and says to them: ‘How hard it will be for those who have wealth to enter the kingdom of God!’ And his wonderfully dunder-headed disciples (Mark adores picking on these poor men) are amazed. They aren’t amazed because they are stupid, but because of a belief that has persisted since human beings first began to accumulate wealth. They were amazed because the rich are considered blessed by God, chosen, touched, rewarded. While everyone knows that the poor are poor way for a reason.

It is not an unfamiliar song in our day. We hear it all the time, in different words. Those on welfare are there because they are lazy, stupid, or in some way bad people. Their character is surely less than that of a Bill Gates, Steve Jobs, or Warren Buffet. And why should we pay for “them” anyway? They could go get a job like the rest of us! The wealthy worked hard for their money, they deserve their reward! 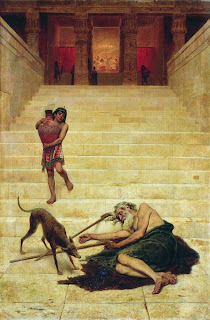 God turns our expectations upside down. From the story of Job, to the cries of the prophets, to Mark’s rich young man, to Luke’s shocking tale of Lazarus and the rich man (Luke 16:19-31, I suggest a read right now) we see over and over again a God who has little use for the wealthy except as a help for the poor. We see a God who universally sides with the poor, the oppressed, and the helpless. We see a God who hears the human assumption that rich means deserving, and poor means despised, and warns us that for God it is generosity and care for others that matters.

Jesus did not instruct the rich man to sell what wouldn’t cause him to have to give up his new chariot, and help that kid on the corner who just needs vocational training so he can go get a job and make something of himself. In fact nowhere does Jesus allow us to make any distinction in our care. When asked who our neighbor is (who are are to love) Jesus tells us that by asking that question we have already failed. We are simply to be neighbors to all.


For Christians there can be no mistake, our duty and our joy, is to be the care of those who have less. This is not an option, it isn’t something we get to debate. Nor does the gospel give any room for qualification. Aquinas has it right, as much as it flies in the face of the capitalism and the current reign of the corporation.

To balance the budget of this nation by cutting vital services to the poor while leaving the very corporations, that have forced many of their former (and current) workers into poverty, with tax breaks, loopholes, and exemptions is not only wrong, it is an abomination in the sight of the Lord. (And I do not use such language often, or lightly.) For any congressman, or representative who claims to be a follower of Jesus there can be no doubt, Jesus leaves us no room for wiggle. We are to protect and serve the poor and the needy. Not when it is convenient, not when it doesn’t hurt, not when we have something left over; but at all times and with all our hearts.

As Mr. Kirkpatrick says so well:

“The refusal by some in Congress to even consider a tax hike (or a reduction in tax benefits) [here he refers to the wealthiest with the most superfluities] in order to meet our fundamental moral obligations to the poor not only destroys the fragile bonds that hold our society together, but also annihilates the very dignity of the human persons they would sacrifice in defense of superfluities that have no moral basis whatsoever.”

I Am A Racist, And So Are You